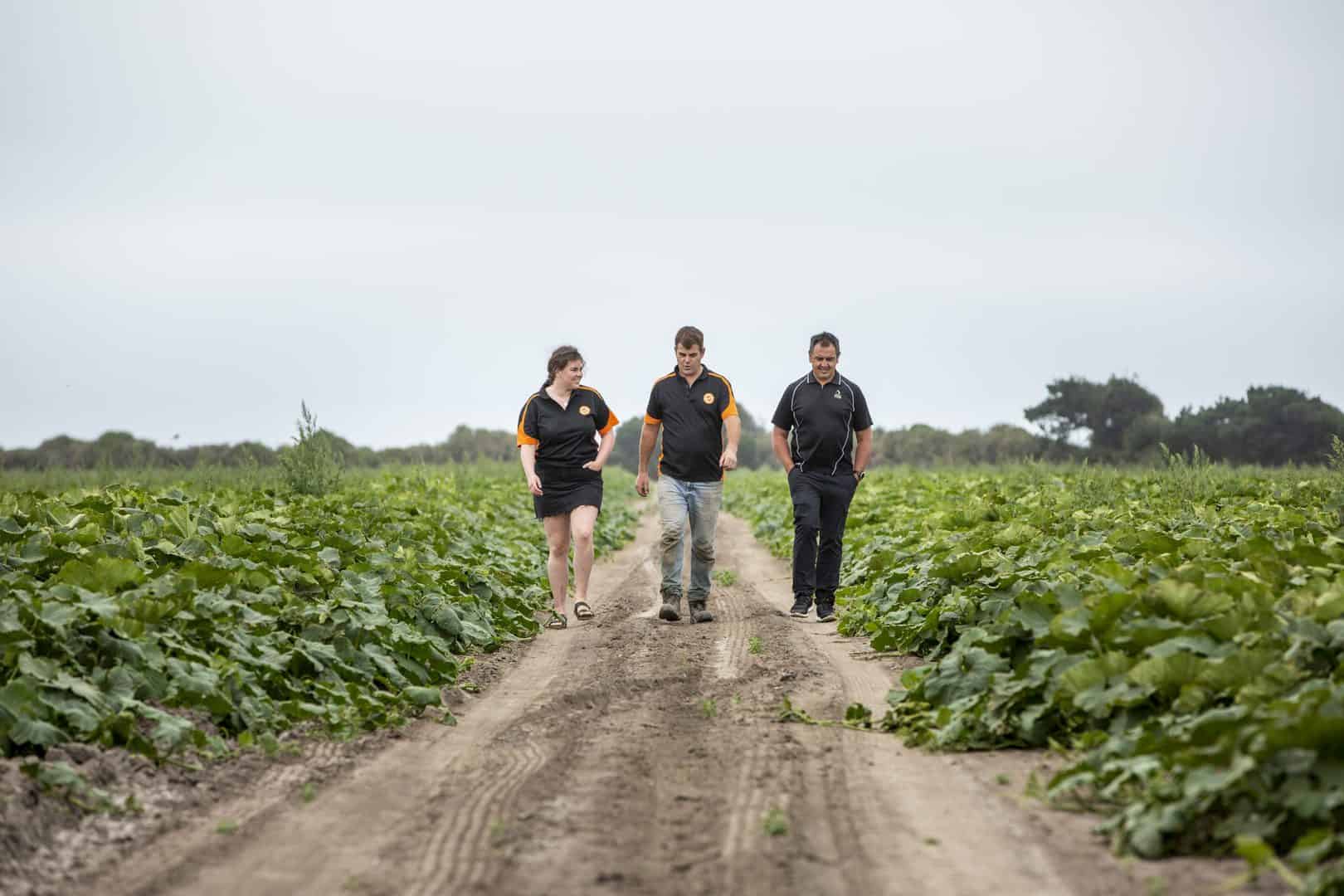 A couple of weeks ago we were lucky enough to have Andrew and Ellery from MG Marketing out on the farm for a farm tour and kōrero. We talked about all things water usage, soil structure and sustainability. Check out what they had to say in their latest newsletter. 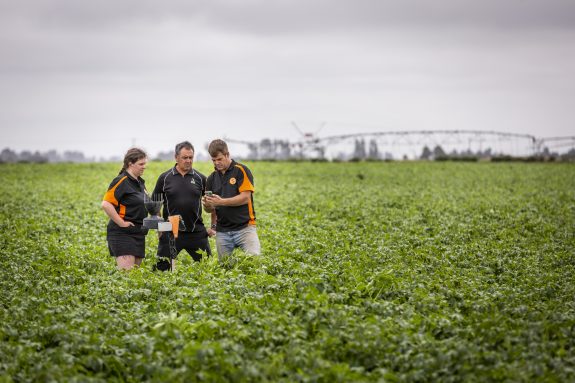 Oakley’s Golden Gourmet potatoes are a well-established Kiwi staple. Other crops grown across 450 ha of land in Canterbury are broccoli, pumpkin and beetroot while maize wheat and grass are grown as break crops.

Oakley’s is a well-oiled operation and a great example of taking a measured approach and consistently doing things well. This is largely due to the fact that farming practices have been carefully handed down through five generations, with each taking great care and responsibility for their respective businesses, including a focus on the environmental, social and economic wellbeing.

The family legacy is now in the hands of Robin and Shirleen Oakley who own and operate Oakleys Premium Fresh Vegetables ltd , along with daughter April (budding 6th generation), who has marketing and development responsibilities. 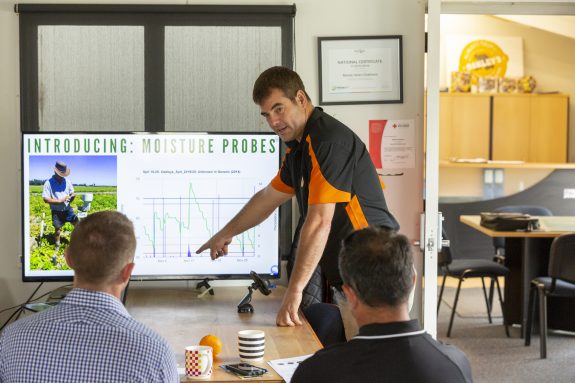 By successfully combining the elements of responsible water use, soil health, scientific research and monitoring, environmental stewardship, community engagement and financial planning, Robin and his team have taken sustainable farm management into a new era.

“We take a three-prong approach to sustainability,” says Robin.  “This means we not only focus on the environment but also the social and economic aspects.   We recognise that unless we can thrive as a profitable business, we can’t take care of the other areas.”

“Our work with the community and our people also play an important role”, added April.  “We’ve completed a lot of work on our mission and our vision lately. It’s been something we see as an important part of a well-rounded approach to sustainability and worth focusing on.” 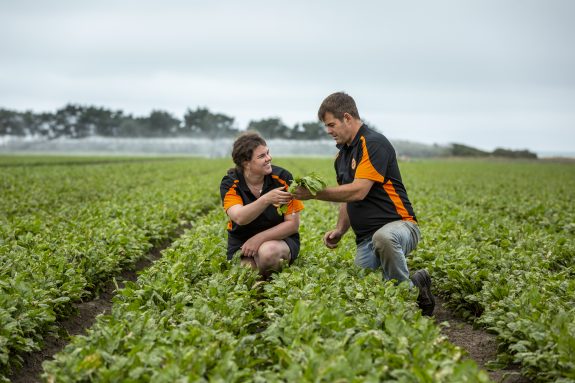 April Oakley with father and managing director Robin Oakley in the paddock.

In fact, Oakley’s is through to the Canterbury regional final of the Ballance Farm Environmental Awards in recognition of their good farm practices which promote sustainable land use.

While Robin and his team aren’t necessarily looking for the limelight, they were encouraged to enter and can see the benefit of showcasing the work they do on-farm.

“I thought it was of great value to the industry to enter because it means there is more sharing of information and we’re getting some good stories out there,” said Robin.

“We have nothing to hide and want to show how we’re walking the talk because it’s easy to just say you’re sustainable.”

“For us, it’s not an issue if someone comes along and says that something isn’t quite right because at the end of the day, we’re trying to get our business where it should be for best practice.”

“Our awards submission is more about highlighting the journey we’re on, not that we’re perfect, but that we’re focused on continuous improvement.” 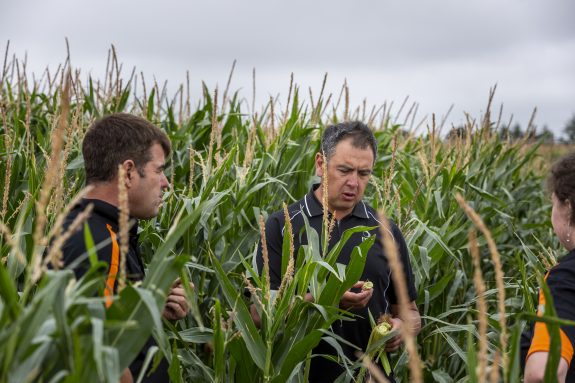 Acknowledging that no one knows it all, they also monitor international trends, seek external advice and leverage partnerships to support their planning, including the use of technical experts, financial advisors and bending the ear of the team at MG.

“A big part of our sustainability programme is that we’re not in it alone,” says Robin. “The key to successful approach and continually improving is to hear from other people, work with other people and tap into their expertise.”

With that said, Robin is quick to point out that external advice and technology doesn’t replace the on-farm expertise that his family has built up over 150 years.

“The advice, technology and equipment is only part of the picture, not the holy grail,” says Robin. “We still draw on generations of experience, so some of what we’re doing now is putting numbers around it to help tell the story and validate reporting and monitoring.” 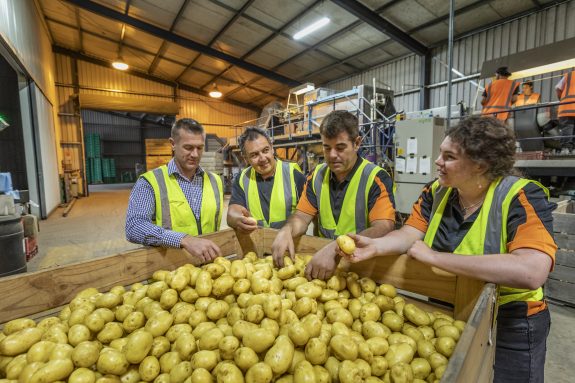 April highlighted an example saying, “when Dad was teaching me about the moisture probe, he felt the soil and predicted the moisture content – sure enough, he was pretty much right.”

Information and data collected about moisture content and soil health across each individual block of land has allowed them to regularly set and revisit production and financial KPIs. This includes helping with decision related to the type of crop covers used, the number of harvests between rotations, the amount of nutrients added and their approach to irrigation.

“We’re collecting all the data provided by the tools and are building our own database so I can create a benchmark and look at the big picture,” said Robin. “That’s with all the crops we grow, with water and nitrogen being the two biggest influences.  Too much or too little of either one is a problem so it’s key to get the levels right.”

“We’re collecting data that shows the soil structure on one block that we have operated on for the past 8 years has improved in the time we’ve been growing on it compared to where it’s been historically”, says Robin. “We think that’s pretty cool considering the farming on land we’re doing is more intensive.” 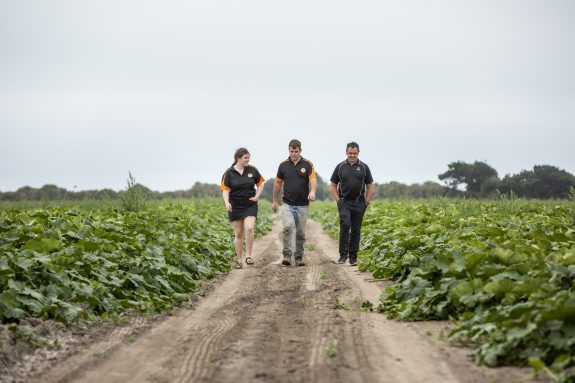 It is clear the Oakley team embrace the responsibility of stewardship that comes with overseeing the Land.   When talking about what it means to look after the land, April references a Māori whakataukī which forms part of their philosophy, ‘Toitū he kāinga, whatu ngarongaro he tangata’, meaning ‘while the land remains the inhabitants are gone’. Robin simply says it’s about not taking ‘a rip shit and bust approach’.